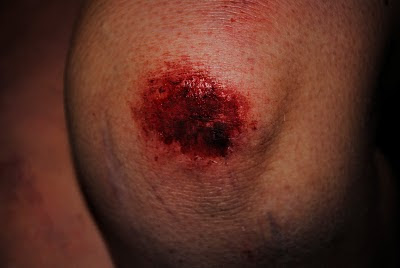 My muscles were a little sore today - just a little, mostly in the adductors (weirdly!) and a little in the hamstrings. Other than that I was good to go. It was 29F (-2C) but relatively calm and overcast. I started off well, and in the 2nd km was feeling really strong like this would be a good workout. Then I fell. I tripped over a crack in the sidewalk on 21st South. My normal route is mostly residential, but I like walking through downtown SugarHouse for a couple blocks early in the morning. It's not too crowded yet and the traffic is a non-issue since I don't cross 21st South. Still, it does involve sidewalks, which are mostly in good repair. I managed to find the one bad spot this morning, tripped, and took a nasty fall. I was wearing tights and gloves, thankfully, or the damage would have been worse. My hands were stinging but it was my left knee that was really bad. I definitely had a serious abrasion on the knee. It hurt quite a lot but I figured I could still do the workout, as it was just a superficial wound. I was really glad my tights didn't rip, because they are a nice pair and they're not cheap.

I got up and did the 3rd km pretty fast, in 6:14! However, that was short-lived. I slowed down a lot and couldn't figure out why until 6k, when I started coughing. I think that the cold air is increasing my problems with exercise-induced asthma. I seem to walk much better on the warmer days. Spring, hurry up and come! Anyway, I was slow today. My legs felt OK; maybe a little tired but nothing too serious. I think I was slow because of my lungs. Oh well, nothing I can do about that.

Email ThisBlogThis!Share to TwitterShare to FacebookShare to Pinterest
Labels: racewalking

Ouch! I'm sorry about your fall. I did the same thing last summer, and my knee still bears the scar, but I also tore one my pants. Glad you and your pants are OK!

It looks as if you are ready from trail racing. :-)

Oh no! And ouch! And people say racewalking is a safe sport!

Tammy
Married with 2 beautiful kids. From February 2005-December 2006, I lost 105 lb on Weight Watchers and went from couch potato to amateur racewalker (...AND I had a baby along the way, in June 2006!). I have a lot of diverse interests, and like to do more things than I have time for... and here I am blogging instead! :)