Well, hello! I'm back after a 3 year hiatus

Pretty sure no one reads this any more, but that's OK. It's helpful to me to have a record of things.

I'm feeling much better than 3 years ago. I went to Spain, walked poorly (no surprise), and when I got back visited an internal medicine doc who suggested an anti-inflammatory diet, in addition to psychotherapy, rest (as much as I could), and a re-evaluation of life. I did all of those things - I went whole food plant-based, and saw a therapist and cut back on as much stuff as possible. Within 3 months of doing those things I felt a lot better - I was able to work w/o fatigue and brain fog, and felt human again.

Since then I have upped my activity level a bit, carefully adding in things that were important to me. During the pandemic last year, my family wanted me to add a bit of seafood, chicken, and dairy back into our diet, so I did that - but just a little bit, a few nights a week. So far that's been fine. I also played the piano a lot more last year, and this year, I upped my running miles and did a marathon in April. Oh, speaking of that, I was able to do a lot of trail running in 2019, as long as I went SLOWLY and didn't do any speed work. I did Rim-to-Rim Grand Canyon in October 2019, and paced my boss for 28 miles of the Run Rabbit Run 100 miler in September 2019. To make all of that work, I did have to cut back my hours at work from 34/wk to 30/wk (that helped a lot), and get the kids to do more chores, and get the hubby to do laundry. All of those small things have made things much more do-able, and I still feel pretty good.

I don't know if I can walk competitively again, and I do miss it. I've put on about 15-20 lb above my racing weight, and that's not my favorite, but I am still at a healthy weight (though on the upper end of the range for my height). I'm working on losing a bit this summer and so far that's going well. I do miss competing and miss seeing my RW friends, and traveling to do meets with them. Maybe in a while I'll be able to do more, if I am careful, but for this season until my kids go to college, I am probably better off taking it easier than that.

I turned 50 last year (2020) and that's had an effect on the way I'm thinking about career things, life things, parenting, etc. I think I've spent too much of my life trying to be the best at a lot of things, and well, I'm not that talented. I'm good at a lot of things, maybe above average at many things, but honestly am not on the upper end of the bell curve at anything, and you know what? THAT'S OK. I don't know why I tried so hard to be amazing at something - and over the past couple-three years I've thought a lot about the fact that it's really good to embrace being average. Honestly, the world would be a better place if we were all just a bit better at being average.

This pic is just an average run with my average dog on a wonderfully average summer morning earlier this month. 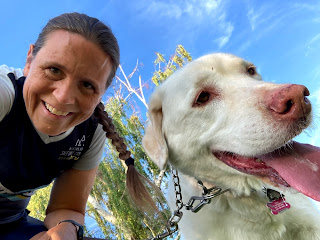 Tammy
Married with 2 beautiful kids. From February 2005-December 2006, I lost 105 lb on Weight Watchers and went from couch potato to amateur racewalker (...AND I had a baby along the way, in June 2006!). I have a lot of diverse interests, and like to do more things than I have time for... and here I am blogging instead! :)